Nigel, would you like to co-host the CBeebies Prom 2019?

Errrrmmm…Yes!!! I’m so pleased to be able to write about this on the Nigel Clarke Blog. When I received the email asking if I would like to be part of the presenting line up for the CBeebies Prom 2019 I must admit I was pretty shocked. I mean, it’s the Royal Albert Hall and one of people’s favourite CBeebies productions. But the overwhelming support we’ve had for The Baby Club meant this awesome opportunity was mine and what a rollercoaster I experienced. It will definitely be in my top 3 presenting moments of all time and here’s why.

I arrived at our rehearsal space and met with my presenting family for the next 5 days Maddie, Cat, Yolanda, Justin and Chris. Some of CBeebies big hitters. Together these 5 have been shaping the lives of pre-schoolers up and down the country for over 15yrs. Thing is, I’d never really worked with any of them. I wanted to spend half the day chatting to these amazing people about the ins and outs of kids tv, but we had a show to put on in 96 hrs. And I think I can speak for us all when I say we had no clue what we were doing at that point. It was time for a script read through.

After a couple read throughs the story started to make more sense. In celebration of the Apollo 11 Mission that carried Neil Armstrong to the moon almost exactly 50 years earlier, we were going on a magical trip ‘Off To The Moon’.

We started by getting to grips with the technical side of things. Our microphones were fitted along with our in ear monitors and we began to get a feel for the space. Then ahead of our tech rehearsal we were also introduced to our conductor Kwame Ryan. I instantly took a shine to him and witnessing him sing through one of our musical pieces due to no orchestra or backing track was a thing of beauty.

Later in the day we headed to the legendary BBC Maida Vale Studios where we met the Chineke! Listening to any orchestra is an awesome thing but on this occasion it was enhanced by what they stand for. Chineke! are Europe’s first Black and ethnic minority orchestra and we soon found out it was going to be a privilege to work with them. What a good day!

This was the day of the open rehearsal. Basically a chance for Proms members and special guests to have a sneak peak at us rehearsing on stage with the orchestra. We were busy finding our positions running sections and using the limited time with the orchestra as best possible. Yet still amongst all the focus and hard work there were still moments that left us in awe. For me Hans Zimmers Earth composed for the BBC’s Ten Pieces Trailblazers was absolutely incredible. It left most of us near to tears and we would eventually find out that this wasn’t a one off.

Two incredible performances to over 12,000 CBeebies fans at one of the world’s best music venues. What can I say? It was a once in a lifetime experience. From walking out and hearing the roar of the crowd to thanking Hans Zimmer for his attendance it was awe inspiring.

Where can you watch the CBeebies Prom?

The first screening of the CBeebies Prom – Off To The Moon will be on Saturday 14th September on CBeebies at 9.30am. If you miss it don’t worry. The full concert will reside on the BBC iPlayer for your viewing pleasure whenever you feel like it. And make sure you look out for extra prom videos that will also be on the iplayer.

Why Teach Black History for Preschool Children? What a year 2020 has been. We’ve had all sorts going on but...
Read More

Why we must talk to children about #BlackLivesMatter On the 25th of May 2020 George Floyd was killed by a...
Read More

Why Dad Chats Live? At Dadvengers we are eager create a network and form a sense of community and 'Dad...
Read More

What is Storytime Live? We are in a very strange time. The country is in Lockdown and with children not...
Read More 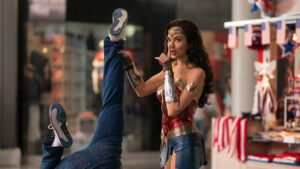 Not many films have made it into cinema’s this year which is why we jumped at the chance to do a Wonder Woman 1984 review. DC have been under pressure… Read More